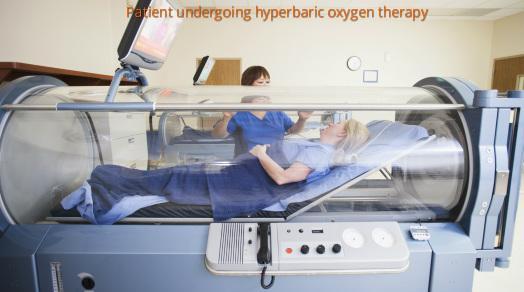 What is Hyperbaric Oxygen Therapy?

Hyperbaric Oxygen Therapy is an exciting medical treatment approved by the FDA and AMA, which enhances tissue levels of life-giving oxygen to promote healing of wounds. It involves breathing pure oxygen in a pressurized chamber, much the same way scuba divers are treated for decompression sickness.

Hyperbaric oxygen therapy may be covered by your insurance. Please give us a call today at 925-687-9447 and we will help get your treatment paid for.

What are the benefits of Hyperbaric Oxygen Therapy?

Non-healing wounds are an affliction which not uncommonly result in limb loss and increasing disability. This is often the result, despite meticulous wound care. That is, until now!

Hyperbaric oxygen under pressure has demonstrated a two to fourfold increase in healing rates when combined with other common medical wound care practices.
According to the 2011 National Diabetes Statistics, more than 60% of leg amputations not caused by trauma, occur in diabetics. In fact, in 2006 there were approximately 65,700 amputations of diabetics' legs. Unfortunately, rates of death following leg amputation are quite high; 4 out of 10 people die in the first year following amputation, and a startling 8 out of 10 people do not survive 5 years following amputation. Additionally, more than half of patients with leg amputation will suffer amputation of the other leg in the following 2 to 3 years. These alarming facts create urgency for early specialized care for the diabetic foot ulcer.

Our goal at NorCal Hyperbaric Medical Clinic at the ROTUNDA in Oakland, is to partner with podiatrists, vascular surgeons, orthopedic surgeons, internists, and wound care specialists, to heal wounds in the effort to save limbs. Our team of hyperbaric specialists work to provide hyperbaric therapy to assist you in healing complicated wounds and prevent recurrence. Our providers are experienced in hyperbaric treatments for wounds caused by diabetes, trauma, surgery, pressure sores, burns, radiation and difficulties with circulation in patients of all ages. We do not provide any procedures other than hyperbaric oxygen therapy.

How does it work?

During HBO therapy, the patient relaxes in a clear acrylic chamber where he (or she) breathes 100% oxygen, delivered to the chamber under increased atmospheric pressure. Substantially more oxygen gets carried to all body fluids including plasma, cerebrospinal fluid, lymph, and intracellular fluids. Oxygen levels are increased, even  in areas with tissue damage. With more oxygen accessible to tissues, natural healing can take place.

Treatments typically last 1 to 2 hours, while patients relax, watch television, or sleep while they are carefully monitored by highly trained technicians with whom they can communicate easily through an intercom system.

Which medical conditions can be improved by using Hyperbaric treatment?

Together these conditions comprise about half of all the cases seen at John Muir hyperbaric department in Walnut Creek.  NorCal Hyperbaric costs about 80% less!

Office Hours
Get in touch